Posted by Ricko Skywriter Posted on Selasa, Februari 07, 2012 with 2 comments 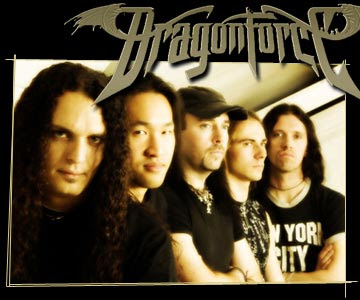 DragonForce are an English power metal band from London. Formed in 1999, the group is known for its long and fast guitar solos, fantasy-based lyrics, and electronic sounds in their music to add to their retro video game-influenced sound. Guitarists Herman Li and Sam Totman are the only two remaining founding members in the group since ZP Theart's departure. Marc Hudson was announced as Theart's replacement in March 2011. A new studio album, The Power Within, is set to be released on April 15, 2012.


DragonForce was founded in 1999 by guitarists Herman Li and Sam Totman under the name of DragonHeart. The two later found singer ZP Theart through an advert, and soon after acquired drummer Matej Setinc, bassist Steve Scott and keyboardist Steve Williams. Totman and Li had a former musical ensemble experience in the band Demoniac. DragonHeart then released a demo, toured with Halford, Stratovarius and headlined their own shows under that name. The band later found that another power metal band with this same name already existed and renamed to DragonForce in 2002.
Drummer Matej Setinc left the band in December 1999 to continue his studies in Slovenia, he was replaced by Didier Almouzni. The band parted ways with Steve Williams in early 2000, and Steve Scott in November 2000. Williams later rejoined and left once again in December 2000, days ahead of the band's tour with Halford and Stratovarius. Steve Scott went on to join Shadowkeep, then Power Quest.
Bassist Diccon Harper joined the band in November 2000 with keyboardist Vadim Pruzhanov joining in February 2001 to complete the lineup for recording their first album.
Harper performed on DragonForce's debut album, Valley of the Damned in its completion, but left the band in 2002 because of a tendon problem that required surgery. 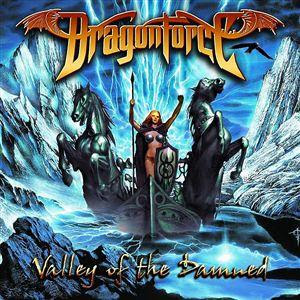 DragonForce recorded their first demo in 2000. It was an independent release, however it was enough to make them one of the most popular independent power metal bands in the UK at that time. Their song "Valley of the Damned" was released as their first single shortly after they changed their name permanently to DragonForce. A promotional video featuring live footage from their tour around Europe was released along with the song. The song was also a huge success on MP3.com where it charted at #1 for 2 weeks as the most downloaded song. Shortly after the demo was released keyboardist Steve Williams and bassist Steve Scott both left the band and were replaced with Ukrainian born Vadim Pruzhanov on keyboard and British born Diccon Harper on bass. Steve Williams later went on to form power metal band Power Quest.
In 2003, the band signed to Noise Records and began recording their debut full-length album, Valley of the Damned. The title track, re-released in promotion of the album, it is one of the most known DragonForce songs to date and is a staple of their live performance to this day. The band's tour for Valley of the Damned lasted until 2004, with the tour ending in Tokyo, Japan. 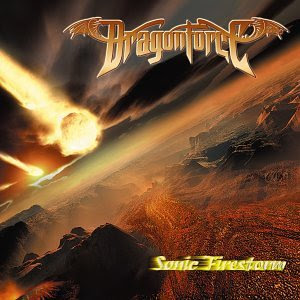 The band's follow-up album, Sonic Firestorm, proved to be even more successful with the lead single "Fury of the Storm". Sonic Firestorm was the first DragonForce album featuring Adrian Lambert on bass and Dave Mackintosh on drums. When Mackintosh entered the band in 2004, they began referring to their style of music as "extreme power metal" due to his fast blastbeats and double bass rhythms. It was around this time that the band began becoming popular internationally and adopted nicknames such as "Bon Jovi on speed" and "Journey meets Slayer."
The tour was much longer than the band's recent tour for "Valley of the Damned" and featured many more headline shows than the previous. The band toured with many well-known metal bands such as W.A.S.P. and Iron Maiden. On the album they also added a video commentary to talk about Sonic Firestorm. 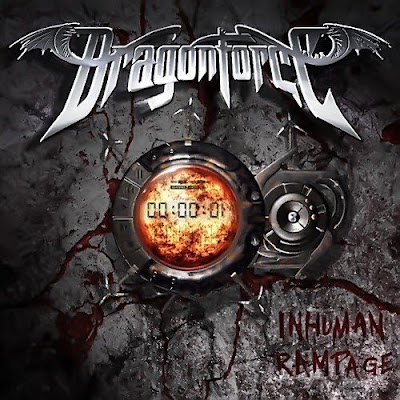 DragonForce underwent various lineup changes before settling with the six current members. The band was introduced to the mainstream with their third album Inhuman Rampage, released in 2006 after signing with Roadrunner Records in UK, USA, Canada, France and Australia. The song "Through the Fire and Flames" is one of their most famous songs and is featured on the games Guitar Hero III: Legends of Rock, Demashita! Powerpuff Girls Z, Guitar Hero: Smash Hits and as downloadable content for the Rock Band franchise. Lindsay Dawson of Herman Li and Sam Totman's former band, Demoniac, appeared as backup vocalist for this album. Before the release of the album, bassist, Adrian Lambert, left the group to raise his newborn son in November 2005. He was replaced with Frédéric Leclercq for the remaining of the Sonic Firestorm Tour. Frederic later became an official member of the band in January 2006. He was also featured in the band's music video for their second single off Inhuman Rampage, Operation Ground and Pound. Inhuman Rampage is a common favourite among DragonForce fans due to its heaviness and complexity. The 'Through the Fire and Flames' single reached gold disc status in USA and Canada. 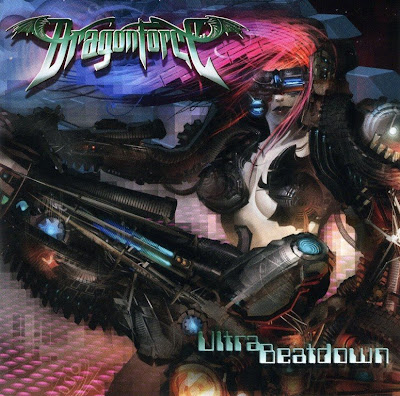 The band toured with Disturbed and Slipknot throughout the summer of 2008 on the Rockstar Energy Metal Mayhem Festival. The band returned in the Fall with the release of their 4th studio album, Ultra Beatdown. The first track and first single, "Heroes of Our Time", was nominated for a Grammy Award for Best Metal Performance on 3 December 2008, losing out to Metallica with their song "My Apocalypse".[4] A short version of "Heroes Of Our Time" is also featured in the video games Skate 2[5] and the full version in NHL 10.[6]
On 22 January 2009, the music video for their song "The Last Journey Home" was released to the Xbox Live Community a week before it was released online.[7]
DragonForce carried out the Ultra Beatdown tour in Latin America, North America and Europe. They were supposed to play in Latin America in May 2009,[8] but the tour was postponed to late 2009.[9] They performed at the Two Days a Week Festival in Weisen, Austria on 4 September.[9] Then, they performed in several cities of Canada and United States from 15 September to 11 October, with special guests Sonata Arctica and Taking Dawn.[9] The next tour was in Germany, from 16 October to 30 October, followed by a single live performance in Luxembourg on 31 October.[9] Then, they went to Latin America to perform in Curitiba, Porto Alegre, São Paulo, Mexico City, Santiago, Buenos Aires and Bogotá from 6 November to 14 November.[9] The final part of the tour was carried entirely in the United Kingdom, from 19 November to 12 December [9]
Herman Li stated that DragonForce would stop touring in December, spend time at home for Christmas, and then will begin writing and recording a new studio album scheduled to be released in 2011.[dated info][10]
On 22 February 2010, the band re-released their first two albums, Valley of the Damned and Sonic Firestorm. Valley of the Damned included newly remixed and remastered tracks while both albums included bonus tracks, updated packaging and DVDs featuring live footage, commentary, and more. Both albums were also released in a box set which featured a T-shirt, a card of guitar picks, and an inflatable guitar.